The beauty of dermal fillers in 2017

Home/The beauty of dermal fillers in 2017

Dermal filler use is much more scientific now than it was in earlier years and the products available for injection keep getting better and better.

Studies have been done on the structures of the face and how they change over the years. The bones of the face actually shrink and change shape as we age. As an injector, I use this information to critically assess where structural support is missing and use a stiff dermal filler such as Juvederm Voluma® to augment the bony volume.

In addition to bony changes, we have a much better understanding now of the different compartments of the face and how to safely replace lost volume in each area. Certain fat pads in the face are prone to shrinking and totally change the look of your cheeks and lower eyelids. They need to be restored but not overfilled.

The function of the facial muscles changes with age, leading to subtle changes in our facial expressions over time. We used to think that the facial muscles became lax later in life. A standard facelift involved cutting and shortening the muscles. Now we understand that the muscles remain the same length and rarely lose tone with age but appear lax because the fat pads under the muscles have shrunk.

I saw this principle being demonstrated by Dr. Mauricio de Maio, a plastic surgeon from Brazil with a PhD in facial expressions. He injected a small volume of Juvederm Voluma® onto a patient’s cheekbone below her eye and showed us how it elevated her eyebrow!

Most of the filler injections I do now involve restoring volume under the muscle so that the muscles of the face function they way they did when you were younger. An added benefit of these deep injections is that bruising is much less likely and the filler doesn’t look lumpy because the muscle, skin and subcutaneous tissue make a layer of padding over it.

A few years ago when we were enthusiastically concentrating on the cheeks, a few problems occurred quite commonly. In my last article, I showed you the problems of making the cheekbones too big and wide and leaving the lower face underfilled.

The other problem I see quite commonly is concentrating on the forward or anterior projection of the cheeks and not bringing the filler around to the sides of the cheeks. The client may look pretty good when she looks straight on in the mirror but not from the side. 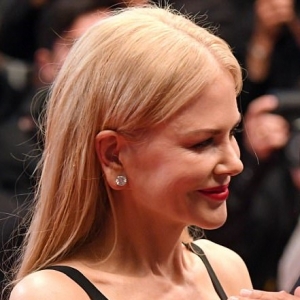 I found this picture of Nicole Kidman recently. Her look, while beautiful, has really changed from her natural appearance. My goal is to keep my clients looking like themselves, rather than distorting their appearance.

When you see her face from the front, she looks beautiful. However, the side of her face shows a shadow indicating an indentation on the outer part of her cheekbone. This makes the meatiness or volume of the anterior part of the cheek look excessive.

I have added an image below where I marked the volume loss in royal blue and the excess volume in lavender.

If Nicole Kidman were my client, I would carry the volume around to the outer part of the cheekbone. The amount I would inject would be small so she wouldn’t take on the appearance of Courteney Cox. And I would gently fill the hollow area in front of her ears. 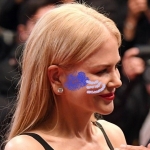 The beauty of restoring volume to the outer cheekbone and the mid-cheek in front of the ear is that she would not need as much volume in the anterior cheek and she would get a lift to the lines around her mouth and to her jawline.

In contrast with Nicole, I have included some pictures of Diane Lane to show the beauty of fillers done really well. 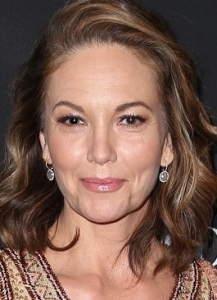 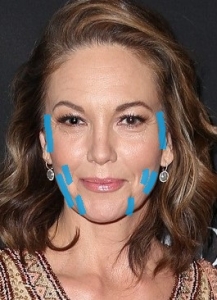 The first image shows Diane in 2015. Here the effect of the filler is not that different from Nicole Kidman. She looks pretty good but I can see a vertical line on the outer cheekbone that appears to be where the filler stops and a shadow behind it that suggests that she is lacking volume at the outermost part of her cheek.

Her lower face has received some volume replacement but you can see lines on either side of the chin and in the lower cheeks where she has lost volume.

I think Diane was 49 in 2015 and looking pretty darn good for her age. Having said that, I have had clients who hated those lines in their lower face and maybe Diane didn’t like them either. Look how she has gotten rid of them this year. 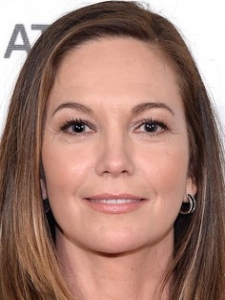 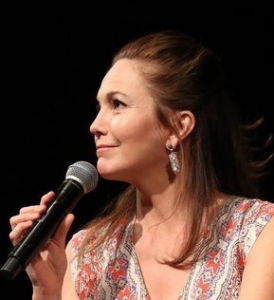 Diane has had beautiful filler injections in the lower face to completely revolumize her chin and lower cheeks and erase all of those lines.

When you compare her chin in 2015 and now, you can see that it has more fullness. The side profile show nicely the roundedness of the chin.

Her cheekbones continue their curve all the way back to the hairline. There is a bit of a vertical shadow on the profile picture but I’m not sure if that is makeup or an area that needs a tiny bit more filler.

She really looks young and soft and beautiful in these pictures. And nothing is overdone.

Diane in 2017 exemplifies my ideal of dermal filler use.

This article is Part III in my series on the evolution of dermal fillers over the past 10 years. See Part I “The bad old days of dermal fillers and why they didn’t work” here and Part II “Dermal fillers for cheeks and lips: a good idea taken to the extreme” here.