Joan Rivers, can we talk?

Home/Joan Rivers, can we talk? 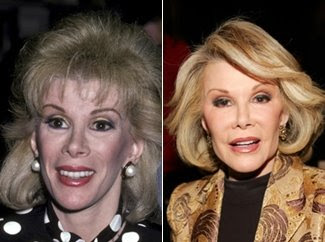 I’ve been meaning to write about Joan Rivers for a long while now but, frankly, I had trouble finding a good quality photo of her before she had any plastic surgery done.

Joan is an excellent model for showing how our ideas about cosmetic medicine and surgery have changed over the years.

In the photo on the left above, Joan is in her early 50s and already had a facelift. Joan’s now 76, so this was taken around 25 years ago, before Botox and hyaluronic acid fillers were available though collagen injections were available then. In a classic facelift, lax facial muscles were cut and shortened to tighten them up and excess skin was cut out and the remainder pulled tighter over the framework of the face.

With a classic facelift, you get the very high brows and the tight skin of the lower face. Her hairline appears well behind the ears and her eyes pull into a bit of a slant. It looks like the framework of her facial bones has the skin stretched taut over it. 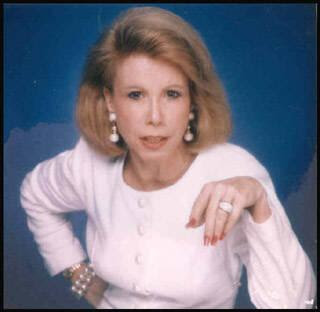 This photo (right) shows Joan before the facelift. You can see that her brows were lower and drooping at the outer ends. Her lower face was fuller with the fullest part of her cheek was down near the level of her upper lip.

So, comparing these photos of Joan Rivers in her 40s and 50s, we can see that in earlier years, the thinking in plastic surgery circles about reversing signs of aging was all about tightening.

The more recent photo of Joan (top right) shows that our new ideas about looking younger are all about volumizing.

As we age, everything shrinks — the bones and muscles of the face. The skin loses collagen and elastin and becomes thinner and more lax. The fat pads in the face shrink and move downwards — that’s why Joan’s cheeks were fullest at the level of her upper lip in the earliest photo.

In the most recent photo of Joan, her cheeks are fuller than they were after the facelift. This is probably from injections of dermal fillers like Juvederm or Teosyal. The cheeks can also be volumized with Sculptra.

Her jaw is wider. They have built up the jaw either with surgical implants or filler or Sculptra.

Her nose looks smaller. I suspect that this is because the tissues around the nose have been revolumized rather than another nose job.

She has dermal fillers like Juvederm or Teosyal in her lips to keep them looking soft and full, and in the lines from nose to mouth and mouth to jawline building up the tissues in this area and making them look more youthful.

In a lot of ways, Joan Rivers looks softer and more youthful now than she did 25 years ago. Sadly, she will always have the stretched-taut appearance of her brows and eyes from the earlier plastic surgery.

The stars who are hitting their 40s now are avoiding the characteristic facelift appearance by keeping the skin tight with fractionated laser treatments like our Pixel and maintaining the volume in their face with injectables.

In this day and age, you really don’t need a facelift to look younger and better.

This article is reprinted from our newsletter of March 23, 2009. To subscribe, click on the big pink button in the upper right-hand corner.